I had heard from a colleague that there were Quenda in Victoria Gardens, Claisebrook Cove in East Perth – less than 2km from the Perth CBD.

So this week my brother and I went out looking for them.  Initially we didn’t find any on the grassed areas and in the first few garden beds – but just by the water underneath the bridge we found this guy scratching in the mulch in a garden bed. 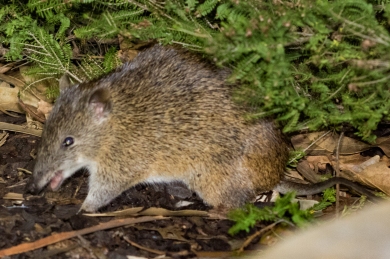 In the photo on the left you can see a grub of some sort in his mouth.

The Quenda seemed pretty acclimatised to people – I imagine they might get fed as well? 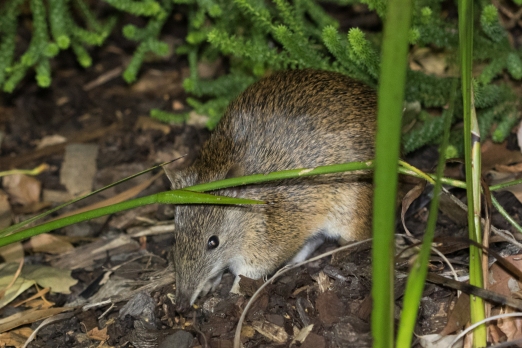 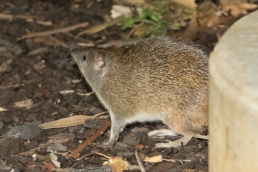 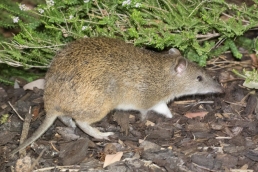 I took some video but I need to improve my technique!

We heard something else in a bush nearby which I assume was another Quenda.  We then looked down along the river to see if we might get lucky and see a Rakali (native water rat).

My brother and I were pleased to see something for the evening in what we both thought was an unlikely spot for a native marsupial – amazing what can be found in the suburbs!

For my birthday over a year ago I was generously given a camera trap by my wife – a Browning Strike Force HD.   Essentially it is a motion activated digital camera with some smarts – designed to be left outside for extended periods.  Initially developed for hunters they have found huge application in wildlife monitoring.  I had wanted one for ages but for the past year only really used it to spot cats in backyards.

You can see the size from my hand 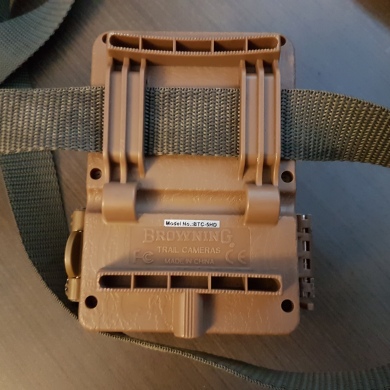 Anyway I had been chatting to Klaus from the Friends of Kensington Bushland as I had been thinking about setting up the camera in the bushland to see if I could photograph any wildlife.

We needed to get council approval and as things transpired a Rainbow Bee Eater nest had been located and they were keen to get a camera on it.  Rainbow bee eaters (also called RBEs) are the grey nomads of the bird world – they spend the winter months in the far north sometimes as far as PNG and summers in the South.  They breed during summer  and unusually for a bird dig a nest burrow in sandy soils.  They are related to kingfishers and have the most amazing rainbow colouration (hence the name!) – see top image.  As the name also suggests they eat bees and all sorts of other insects – this bird was seen with a large dragonfly and beating it to death against the branches of the tree!

The above photo shows the burrow.  I met with the council representatives and we set the camera trap just in front of the nest – taking care to conceal it from the path to prevent theft.  It was set up on 03/01 and finally removed on 27/01 – so just over 3 weeks in total. 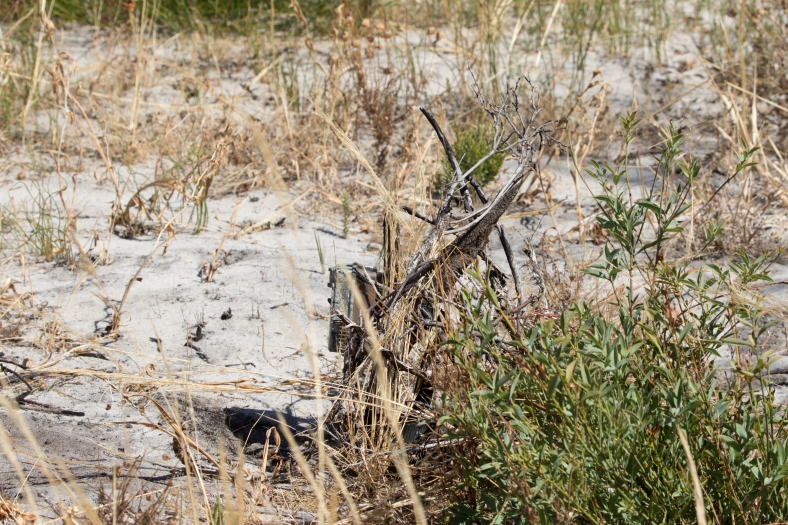 Over that period the camera took approx 7500 images of which 150 had animals in shot – most were of waving grass (one of my learnings!).  Another learning was that the camera date was set in US format – so when resetting after a battery failure on 08/01 I had actually set it to 1 Aug!! 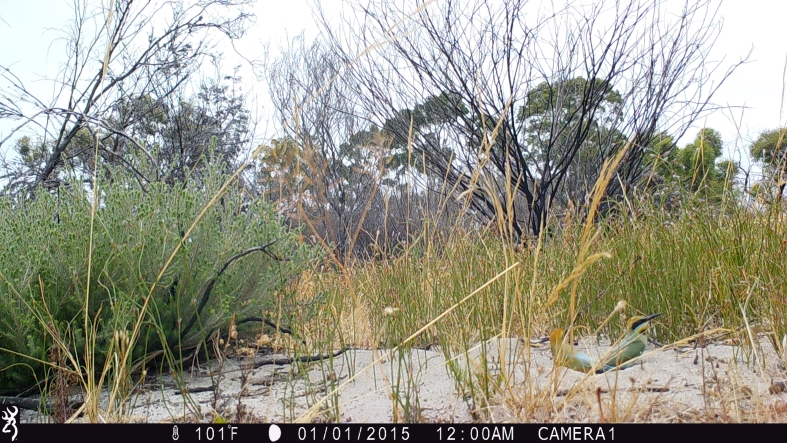 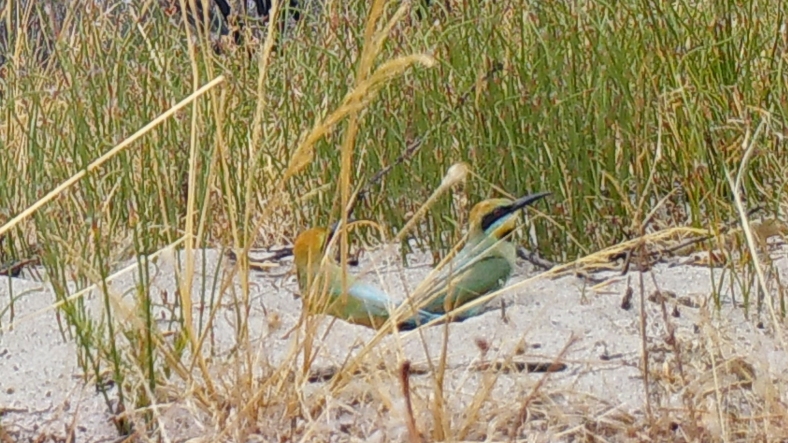 Above is one of my earliest images – I had some issues with the camera resetting itself and chewing batteries – so I updated the firmware and then it behaved perfectly.  My next learning was being careful where you aim it.  I had taken it home to update the firmware but when I put it back I actually had it aimed too high.  Fortunately I got some amazing shots of the birds in flight, however missed the action at the burrow. 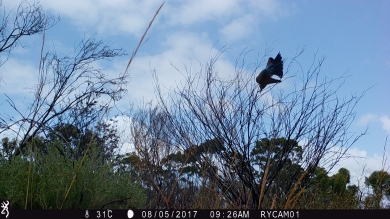 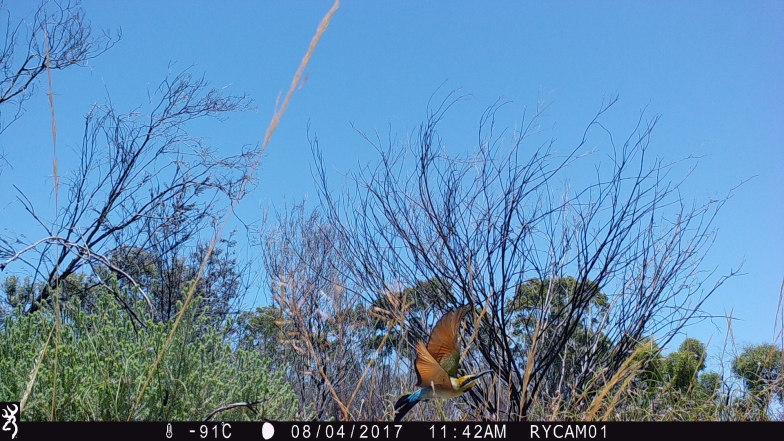 The inbuilt thermometer seems to be unhappy when the temp is over 46-48 degrees and then goes negative!

Here is Steve from the council trimming back some of the grass to reduce shots of the wind in the grass. 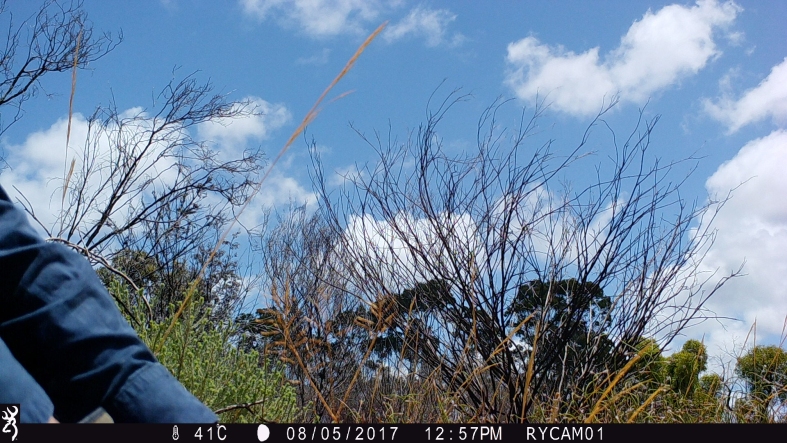 I came back and re-positioned it but then didn’t get any more images from the burrow – it looked like the RBEs had left it by then. 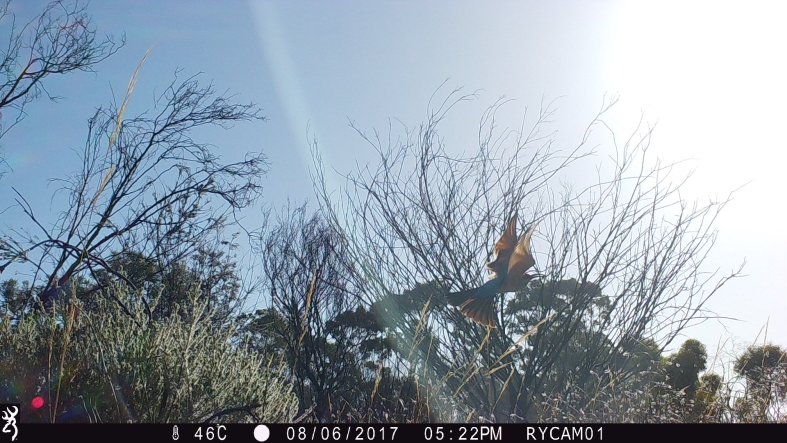 Looking back through all the images this is the last image I can associate with the RBEs leaving the nest.  The other image was taken only 3 mins before.  This was on 13/01, ten days after I had first placed the camera.  The chicks fledge after thirty days and we were not aware of when the egg first hatched, but could see the bird going into the burrow with food.

Last image of bee eaters – appears to be 3 birds

This image is the last one that I think are Rainbow bee eaters – the colour is off as I have it facing into the sunset (I have now learnt best to aim south to avoid the sun).  I can make out 3 birds so I like to think its the 2 parents and the fledgling.  This was 3 days later on 16/01. 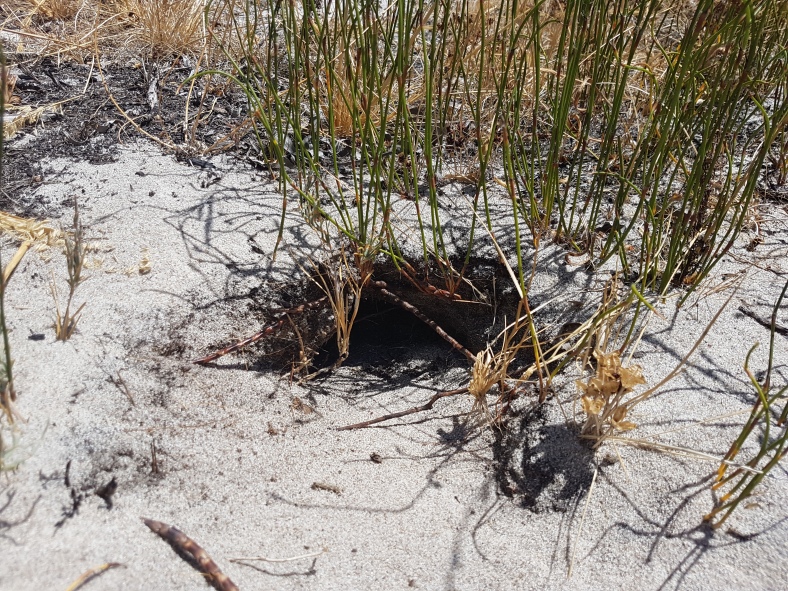 This image was taken on my phone camera on 28/01 – if you look carefully you can see spider webs across the burrow and it is no longer in use.

Here are a few other images that are interesting.  It is quite effective at night and uses infrared flash to take photos.  I ended up spending quite a bit of time at the bushland late at night as that fitted best with family commitments.

Anyway to finish off – I didn’t get a shot of the fledgling leaving the burrow as we had hoped for, but I learnt heaps about using the camera and got some amazing shots of animals just from the one location in the bushland.  I hope to get some more opportunities to deploy the camera and see what other critters I can find. 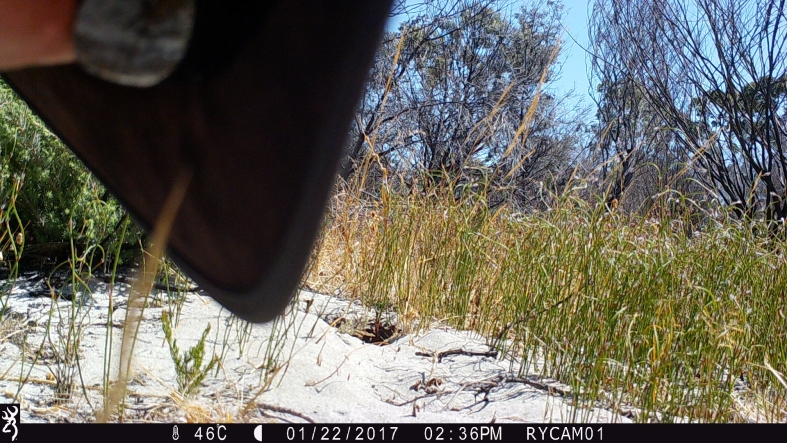 Smile 🙂 I am on candid camera!